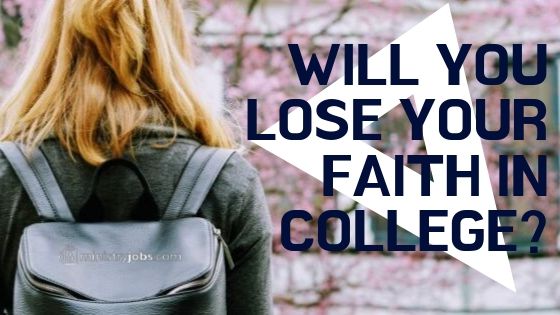 Will You Lose Your Faith in College?

Will you keep your faith in college? Odds are you won’t, at least according to Barna Research.

Barna estimates that roughly 70% of high school students who enter college as professing Christians will leave with little to no faith. These students usually don’t return to their faith even after graduation, as Barna projects that 80% of those reared in the church will be “disengaged” by the time they are 29.

Will you be one of the 80%? Maybe abandon your faith when surrounded by peers who don’t know God? Most people assume their early faith will carry them through their lives. King Joash probably did. He began to reign at age 7 (2 Chronicles 24:1), and he “did what was right in the eyes of the Lord all the days of Jehoiada the priest” (2 Chronicles 24:2), King Joash’s mentor and most trusted advisor.

When Jehoiada was alive, Joash faithfully followed God’s laws and made sure others did as well. He even inspired others to give joyfully to God: “All the princes and all the people rejoiced and brought their tax and dropped it into the chest until they had finished” (2 Chronicles 24:10). Joash’s faith certainly seemed genuine.

But when Jehoiada died, Joash turned to his peers. When the princes of Judah came to visit Joash soon after Jehoiada’s death, the king listened to them. After the princes “paid homage to the king” (2 Chronicles 24:17), which probably meant they flattered him, Joash abandoned the house of the Lord and turned to serve idols. These “friends” may have convinced him that they were open-minded and in touch with popular culture, and that Jehoiada had been too strict and old-fashioned. Joash listened to them and reversed all the good things he had done earlier, even murdering Jehoiada’s son Zechariah when he was questioned.

This behavior seems like a shocking turnaround, but it shows that King Joash had likely been trusting in Jehoiada and not God. His faith was not his own. Since he lacked personal conviction, he was easily swayed by faithless people around him. God judged him for his wickedness and he was soon murdered by his own servants. Joash shows us that it doesn’t matter how well we start in the Christian life; it matters how we finish.

For Freshmen and Seniors

Many of us started strong. We assumed that if we were raised with the right values and involved in church, we would always stay faithful. I believed that. There was passion for the Lord in high school and college, but as I immersed myself in my career, my church attendance became sporadic and my time with God infrequent and rushed.

I found that the less time I spent with the Lord, the less I wanted to know him. My unbelieving coworkers were my closest friends. Originally, I hoped to share my faith with them, but instead they passed on their spiritual indifference to me. They had a subtle but profound influence on my priorities. As my faith was getting watered down, reading the Bible and going to church felt more legalistic than life-giving. It was only when I faced real suffering that my faith became important again.

Whether you are a freshman or a senior, if you are heading off to college, you’re in a vulnerable place. It’s easy to assume you’ll develop better spiritual disciplines and get involved in Christian community later on. But as you juggle life’s challenges, it’s tempting to put off pursuing God until you feel more settled, unintentionally falling into the habits of lost people around you. The shift is gradual and often unnoticeable.

Three Ways Not to Wander

So, what can you do, with God’s help, to be one of the 20% raised in the church who remain faithful through college and into their twenties?

First, don’t assume that you won’t drift away — or that if you do drift away, you will eventually come back. We are all vulnerable. Ask God daily for an enduring passion for him. For God to give you joy in him alone. Ask him right now to keep your heart from wandering.

Second, stay closely connected to God. It may sound trite, or even legalistic, but reading the Bible and praying really are the simple keys to the Christian life. As you read, focus and pay attention rather than mindlessly skimming words to “check off the box.” I love using a Bible reading plan because it takes the guesswork out of what to read each morning. Have a look at the Discipleship Journal plan. If you’re reading the Bible regularly for the first time, begin by just reading the New Testament sections each day. Try reading with a pen and paper, jotting down insights, questions, and observations, asking God to open your eyes to see truth and to breathe life into his words (Psalm 119:18).

Third, find real Christian fellowship. Plug into a church and a small group or on-campus ministry. Intentionally make Christian friends and spend time with them. Having good Christian friends in college reduces the pressure to conform. The people around us influence us far more than we realize. King Joash is a vivid example of how easy it is to abandon your faith when surrounded by the wrong people.

Charles Spurgeon, a London preacher in the 1800s, once said,

Oh, what a sifter the city of London has been to many like Joash! Many do I remember whose story was like this: they had been to the house of God always . . . and everybody reckoned them to be Christians — and then they came to London. At first, they went . . . to some humble place where the gospel was preached.

But after time they thought . . . they worked so hard all the week that they must go out a little into the fresh air on Sunday; and by degrees they found companions who led them, little by little, from the path of integrity and chastity, until the “good young man” was as vile as any on the streets of London; and he who seemed to be a saint, became not only a sinner, but the maker of sinners.

None of us is immune from slowly drifting from God. As we see from King Joash’s life, even when we’ve lived an outwardly Christian life, it’s easy to start living like those around us. Yet those who truly know Christ cannot fall away. As 1 John 2:19 says, “If they had been of us, they would have continued with us.” Those who leave the faith never truly possessed it but, as John Calvin said, merely “had only a light and a transient taste of it.”

Will You Fall Away?

Will you fall away in college? You can fight the current, and hold fast to God. First, “Examine yourselves, to see whether you are in the faith. Test yourselves. Or do you not realize this about yourselves, that Jesus Christ is in you? — unless indeed you fail to meet the test!” (2 Corinthians 13:5). Ask yourself if Jesus is your treasure or if you are only borrowing the faith of those around you. If you have any doubt, commit yourself now to pursue Christ as hard as you pursue anything.

But if you genuinely know the Lord, and see evidences of transforming grace in your life, don’t be afraid that you’ll fall away. He will hold you fast and will strengthen you and help you. God will uphold you with his righteous right hand (Isaiah 41:10). If you are his, then you can be sure “that he who began a good work in you will bring it to completion at the day of Jesus Christ” (Philippians 1:6).

Article taken from DesiringGod.com and written by Vaneetha Rendall Risner. Risner is a freelance writer and regular contributor to Desiring God, who blogs at danceintherain.com. She is married to Joel and has two daughters, Katie and Kristi. She and Joel live in Raleigh, North Carolina. Vaneetha is the author of the book The Scars That Have Shaped Me: How God Meets Us in Suffering.

Do NOT follow this link or you will be banned from the site!