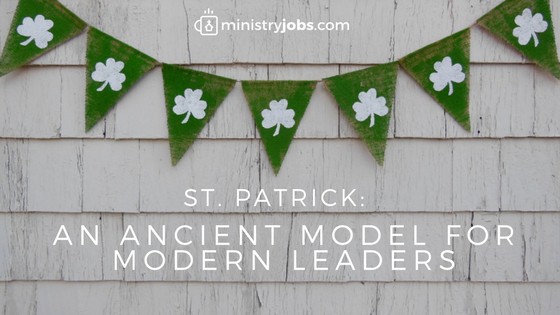 As the Chicago River turns green, people pinch each other, and corned beef gets big exposure in grocery stores, I wonder what St. Patrick would think. After all, “his day” gets a lot of noise and attention. But is the attention and noise in the right place and for the right reason?

I believe St. Patrick is one of the best models we have for ministry in the 21st century. Ireland in the 4th and 5th centuries was barbaric, unrefined and far different from the culture of the church in that day. In fact, it was this cultural divide which had prohibited any success by the Roman Catholic Church in evangelizing Ireland.

The True Story of St. Patrick

That is until Patrick. At age 16, Patrick was captured by Irish raiders and taken back to Ireland as a slave. He remained there for six years before he heard a voice say “behold thy ship is ready.” He found that ship two hundred miles away and returned to Britain, where he found his family as a twenty-something.

Like his father, Patrick got involved in his church, ultimately ordained as a priest. In 432 AD, Patrick responded to a vision, which led him to return to Ireland as a missionary. Though no outside religion has penetrated Ireland for a thousand years, Patrick experienced incredible success. Reports vary, but it seems Patrick planted several hundred churches and baptized thousands, possibly over 100,000 people. His influence continued after his death, with the end of the slave trade and a decrease in violent crimes.

To this day, Patrick is credited as evangelizing Ireland. So, we celebrate him…by drinking green beer and scouring our closets for something green.

Patrick’s Model for Leadership and Influence

Patrick modeled 3 practices which are essential for Christian leaders today.

1. He actually loved the people he wanted to reach.

In his Confessio, Patrick wrote about his vision in 432 AD. “And I read the beginning of the letter containing ‘The voice of the Irish.’ And while I was reading aloud the beginning of the letters, I myself thought indeed in my mind that I heard the voice of those who were near the wood of Foclut, which is close by the Western Sea. And they cried out thus as if with one voice, ‘We entreat thee, holy youth, that thou come, and henceforth walk among us.’ And I was deeply moved in my heart, and could read no further; and so I woke.”

In words that mirror Paul’s vision of a Macedonian man inviting him to come and share the gospel, recorded in Acts 16:9, Patrick’s vision was not of fame, fortune, comfort or safety. The voices of those who enslaved him summoned and he went to Ireland in response. His Confessio describes how that love began even as a slave, when he began to desire the salvation and transformation of the raiders who stole him away from his home in Britain.

2. He saw the best in others and sought to draw it out.

Patrick knew he could not build trust with nor influence those he did not love. In his terrific book on Patrick entitled The Celtic Way of Evangelism, George S. Hunter shares a Chinese poem which he feels embodies the attitude of Patrick.

“Go to the people.

Start with what they know.

Build on what they have.”

Patrick was committed to looking for the best in the Irish and seeking for Christ to redeem that. He wanted to build an Irish church, a Celtic church, not a Roman church in Ireland.

In his seminal book, How the Irish Saved Civilization, Thomas Cahill wrote, “Patrick found a way of swimming down to the depths of the Irish psyche and warming and transforming Irish imagination – making it more humane and more noble while keeping it Irish.”

The kind of attitude Cahill attributes to Patrick could only originate from love and respect. We live in a world which dehumanizes and attacks those who disagree with us, especially on social media. How different would things look if we took Patrick’s approach, in particular with those we do not agree?

3. He chose to offend insiders in order to engage outsiders.

Unlike other missionaries, Patrick refused to wear his priestly robes. Instead, Patric wore native Celtic clothing. This led to no small amount of consternation among his superiors back in Britain.

Patrick broke norms by inviting outsiders into gatherings of Celtic Christians. Believing that outsiders could belong before they believed, Patrick suspected outsiders would begin practicing habits a follower of Jesus would before they ultimately realizing they were believers. Long before modern churches spoke of “you can belong here before you believe,” Patrick lived this posture in 5th-century Ireland.

Ultimately, Patrick was brought to trial in Britain. While the details of this trial are spotty at best, it seems that his methods were questioned to the end. Unlike modern churches which debate what is appropriate and inappropriate in terms of outreach, Patrick decided which group’s opinion of him mattered most, and he allowed the other to be offended to their heart’s content.

Legend attributes a long prayer known as St. Patrick’s Breastplate to the missionary who evangelized Ireland. While we cannot be entirely sure he wrote it, this prayer reflects the holistic view Patrick embodied in his faith, leadership, and ministry.

One particular section is most well-known. This section confesses a Christ-centered worldview which should guide all leaders. This prayer calls each of us to depend on Christ, lead from our relationship in Christ, engage our world like Christ and look for Christ in each person we engage – whether online or in-person.

Christ, be with me, Christ before me,

Christ behind me, Christ in me,

Christ beneath me, Christ above me,

Christ where I arise,

Christ in the heart of every man who thinks of me,

Christ in the mouth of every man who speaks of me,

Christ in every eye that sees me,

Christ in every ear that hears me.

St. Patrick is one of my heroes. I hope this profile in some small way redeems this day from drunken revelry and towards intentional reflection.

May we all love the people in our cities the way Patrick loved the Celts in Ireland.

Written for Catalyst by: Scott Savage

Scott is a pastor and a writer from Prescott, Arizona. You can read more of his writing at scottsavagelive.com.