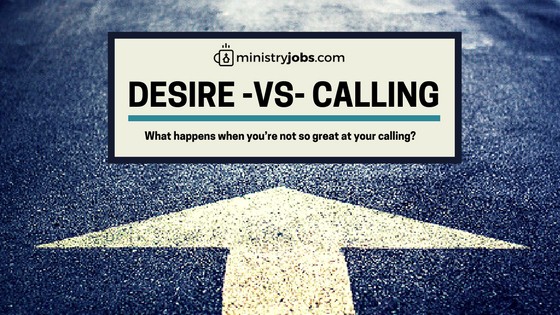 Desire is not the same thing as a calling.

We’ve all come across people who think they’re really talented at something when in reality, it’s quite the opposite. It makes me think of the all too familiar TV show, American Idol. In the early stages of the season, some people try out who really have no business singing in the shower much less in public. On more than one occurrence, I’m sure it went thru my head, “Why hasn’t someone told them that they can’t sing?”

Being a part of a worship staffing company called Froot Group, I regularly see videos that worship leaders have submitted for their profiles. Some are talented and some I’m left with asking that question – Why hasn’t someone told them that they can’t sing? In all of my conversations that I have with candidates, I always ask how they got into music ministry. It always starts out with the “I was called” story.

What does that even mean? Being “called” primarily means being obedient to the ongoing direction of the Lord’s leading in your life.

Someone might ask though, “What happens when you’re not so great at your calling?”

Today’s church has grown to have many distinctive differences from the church we read about in the Bible. One of the most prevalent is having unqualified church staff. Many pastors never develop leadership skills before being assigned a position within the church, so much of pastoring becomes on-the-job training. We find that these leaders have not been spiritually vetted and therefore are not fit for leadership in the church. You always run the risk of causing a disaster when putting someone in a position who has not been proven and ready for it.

We’ve heard of so many young Christians who say that they’ve been called to ministry. They know how to say moving prayers and know scripture yet maybe they just don’t have a love for people. Maybe they love people but just don’t have the talent for music or teaching like how they believe they do. It’s easy to confuse skill with talent. Skill is something that you’ve worked to acquire. It is developing the talent God has given you. You can be very talented but not have any skill. If we are going to be effective in serving the church, a lot depends on skill.

When Moses had to find men to oversee the construction of the tabernacle, he chose men whom God had gifted with “skill and intelligence” (Exodus 36:1).  When David looked for a Levite to lead the singing it says he picked Kenaniah “because he was skillful at it” (1 Chronicles 15:22).  Excellence has a purpose in church. It’s to focus people’s attention on God, on His attributes, on His promises, on the things that He has done for us. We want people to be completely focused on God.

So the question still stands, what happens when excellence is untainable with the people that have been hired for those positions? For starters, the church should be understanding and supportive of opportunities for the pastor to learn from others. The church needs to also find ways to share information more readily with the pastor, without arguing and complaining — because that’s not biblical.

In regards to the pastor, they need to be humble enough to admit the need for further training. This requires great humility on the part of the pastor to allow input into their leadership. The pastor needs to learn the art and humility of asking questions to see what areas they’re struggling. The pastor also needs to build an accountability structure of people who have been given the authority to speak into their life. You may also want to take some next steps in training and affirmation, including mentoring and discipling from seasoned pastors at your church or in your community.

So how do you handle a conversation like this? What is the best way to speak the truth without breaking someone’s heart? Just remember that you will never avoid offending people but your kindness and honesty will create the best possible situation. They might feel you’re being unfair, critical, and harsh, but that doesn’t mean you are. You just need to tell them. But “how” you do that makes all the difference. If the pastor is bad, you owe it to the church to be honest. Getting back to those American Idol contestants – no one was honest with them. Some of them faced national humiliation as an audience of millions watched, astonished by their lack of talent, and clarity. Any time I’ve had to tell someone they shouldn’t be on the team, I’ve tried to help them see that serving on the team keeps them from using the gifts God has given them. In my opinion, it’s best to mentor those who can be mentored, and be honest to those who will negatively affect your team. True leadership is about taking everyone forward not keeping everyone happy. Someone has said that the “secret for success I do not know, but the secret for failure is trying to keep everyone happy”. I know confrontation is difficult but It must be done prayerfully, respectfully and intentionally.

So what are your thoughts? Take a moment in the comment section share what you think –  agree, disagree, add your two cents, or ask questions.

Written by Meggan Jacobus. Meggan is the staffing manager at Froot Group, a worship staffing and consulting company.